Prolonged SITTING is the “new smoking” it’s not good for you!! 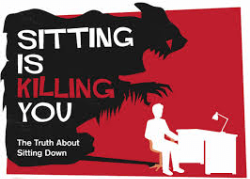 You’ve probably been told as a child, to sit up straight and stop slouching. But it was not until the start of my professional career that I truly began to understand the importance of proper posture and the difficulty of fixing it once it’s become problematic. Specifically, the problem with prolonged sitting is that it often leads to muscle imbalances in the neck, shoulders, lower back and hips. With prolonged sitting muscles are not only placed in shortened positions, but are also neurologically facilitated and programmed to become increasingly short and tight. Over time these muscle imbalances can cause tension headaches, low back pains, disc herniations and even an increased chance for arthritis.

With all of these muscle imbalances the body loses the ability to keep it’s joint’s centered as it moves through a given motion. Depending on the region, this can cause arthritic changes to the neck and back, it can wear through soft tissue structures like spinal discs, rotator cuff muscles, or lead to an increased incidence of tension headaches originating

The simplest recommendation is that you stand up at least once an hour and move around. Not only will this get your blood flowing but it will help to combat against creep– the gradual onset of muscle contracture with prolonged sitting. Following good ergonomics can be another important step as well as taking micro-breaks. One of the best known micro-breaks was widely popularized by Dr. Stuart McGill at Waterloo University. The brief exercise involves standing up, stretching the arms up over the head and briefly reaching one arm, and then the other arm, toward the ceiling.

Prolonged sitting and lack of movement reeks havoc with your posture and nervous system thus lowering your state of health.